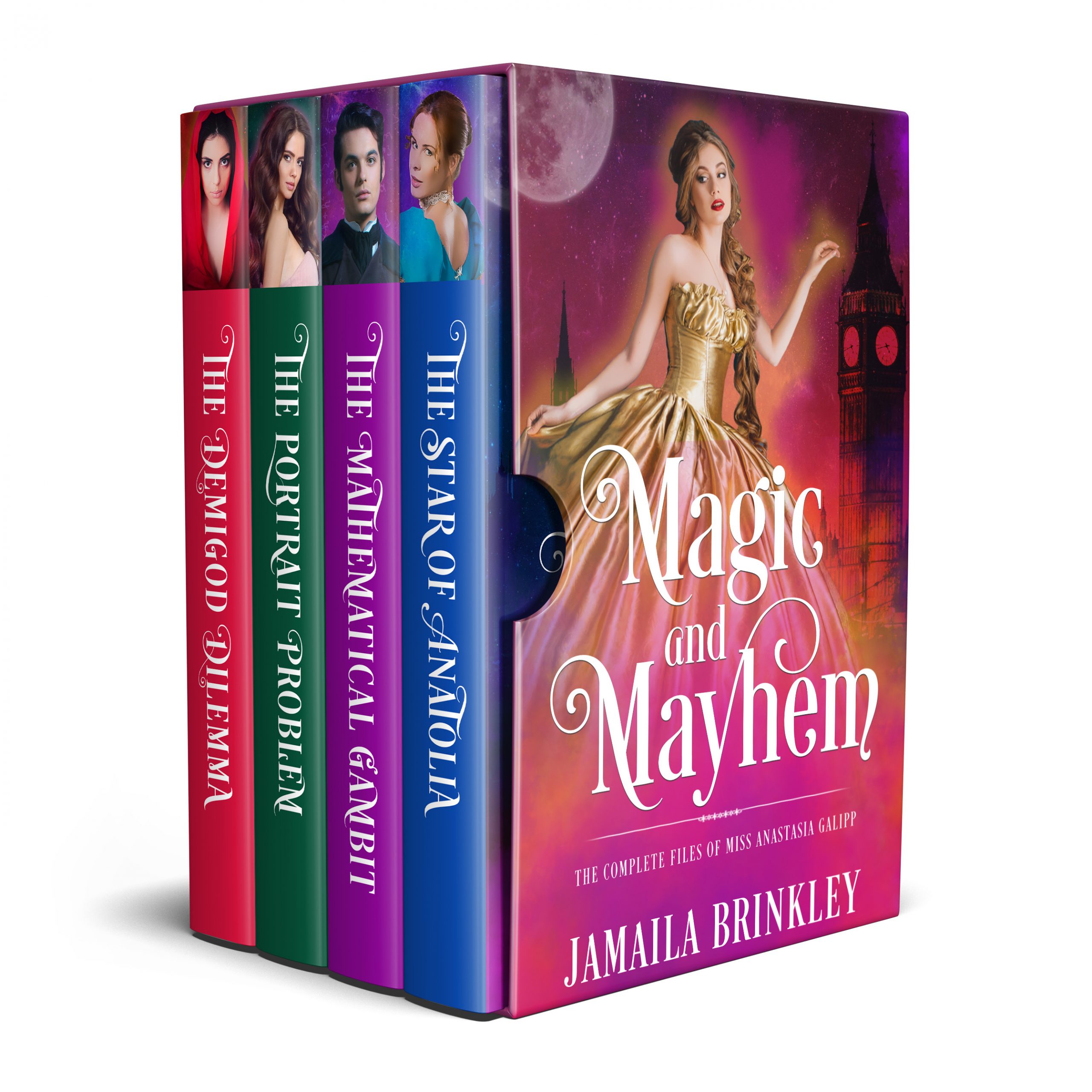 Meet Miss Anastasia Galipp. Debutante, know-it-all… and the Home Office’s secret weapon when they need someone to investigate magical mysteries. With her wizard partner Simon, Anastasia will take on the ballrooms of Mayfair and all of the secrets they hold. From missing jewels to kidnapping, cults, and more, Anastasia and Simon will make their way through mysteries, mothers, weddings, and an unexpected duchess in this compilation of all four Galipp Files novellas.

The Star of Anatolia: Meet Miss Anastasia Galipp. Debutante, know-it-all, and the Home Office’s secret weapon. She gathers gossip in the ballrooms of Mayfair, winnowing through to discover Society’s most unsavory secrets. But her position is a precarious one, and she needs to prove herself to be the spy she thinks she is once and for all. When she’s assigned a case that hits close to home, she thinks she sees her chance. But add in a wedding to stop, a new partner, some dangerous magic, and an unexpected duchess, and Anastasia’s life is suddenly more complicated than she ever imagined.

The Mathematical Gambit: Simon Armistead has a lot on his plate. He’s been newly promoted, and he’s got senior wizards and senior spies breathing down his neck, expecting him to prove himself. But most worrying of all are his feelings about another neck entirely – that of his partner at the Home Office, Miss Anastasia Galipp. Who seems to be ignoring him.
Anastasia is almost too busy with her work integrating female agents into the Home Office’s ranks to notice the way her heart stutters when her partner is around. Almost. But when they’re put together on a new case, she’ll have to face the truth.
Before Simon and Anastasia can reconcile their feelings about one another – not to mention that one unforgettable kiss – they’re sent on a mission that threatens not only their loved ones but society itself. Can they solve the mystery plaguing Mayfair? And will they solve the mystery of each other in the bargain?

The Portrait Problem: All Anastasia Galipp and Simon Armistead want to do is plan a simple wedding, and get back to work for the Home Office. But when the Duchess of Edgebourne is involved, nothing is ever simple. And when Anastasia’s mother shows up in London, everyone’s plans go awry. Add in a double wedding, motherly conspiracy, and a magical mystery that nobody expected to find in their midst, and Anastasia, Simon, and their families will be put to their greatest test yet.

The Demigod Dilemma: When young ladies go missing from Mayfair, the Home Office knows just who to call. Anastasia Galipp might be newly married, but she’s still got a nose for gossip and her finger on the pulse of magical London. As she and her friends navigate this new case, they’ll meet a mysterious woman who isn’t at all who she says she is. Junior wizards, ancient rituals, and of course a little light matchmaking will all make for the most dangerous Season yet. It’s a good thing Anastasia’s always up for a challenge.

Books 1-3 were previously available individually; Book 4 was originally published exclusively in the Caught in Crystal anthology.