February was, on the whole, a decidedly unpleasant month. Lots of drama and two weeks of illness put a major damper on our birthday party ambitions – which is probably for the best, on the whole. But we did manage to pull off a pretty great first birthday party nonetheless, and the construction theme was a big hit. The babies were pretty confused about the whole thing – skipping their afternoon nap in favor of lots of people and chaos around didn’t help, I’m sure.

They got their own “smash cakes” – just a couple of pieces of cake I’d cut from leftovers from making the big cake and covered in whipped cream. They were somewhat unimpressed, but tried to get into the spirit of the thing since there was a vast crowd of people standing around egging them on.

We had a lot of fun putting together the birthday party. A few of the things on our master plan didn’t wind up happening, but here’s a recap of what we did.

The babies wore their custom-made ‘Brinkley and Brinkley Wrecking Crew’ t-shirts for most of the festivities – after they got covered in cake, we had spare outfits standing by after a quick rinse in the sink.

We hid away a bunch of the toys that usually live in our living room nook, and left only the ‘construction’ type toys. We added a piece of caution tape and a sign to make this area a themed play area for the baby-aged guests. (Bigger kids were invited to draw and play with Legos in our home office, which is generally just called the ‘Lego room’ by our friends now.)

The construction-themed ice cream sundae bar was a big hit; I didn’t take the ice cream out until about an hour into the party, when all the guests had arrived and most had already had some snacks and settled in. We opened up the ice cream bar, then did the babies’ cake smash, then sliced the big cake.

We pushed our dining room table against the wall to make it a large buffet and leave space for folks to stand and mingle. A black party tablecloth got dressed up with a few pieces of yellow duct tape to turn into a road, and forks and knives were stowed in paint cans labeled with more duct tape like they were in a workshop. Napkins were tucked into one of the kids’ dump trucks!

We also hung caution tape from the ceiling instead of streamers, and made a ‘Happy Birthday’ banner out of extra plates and free printable letters, strung on some kitchen twine and hung over the dining room window. Oh, and that big cake? Take a look: 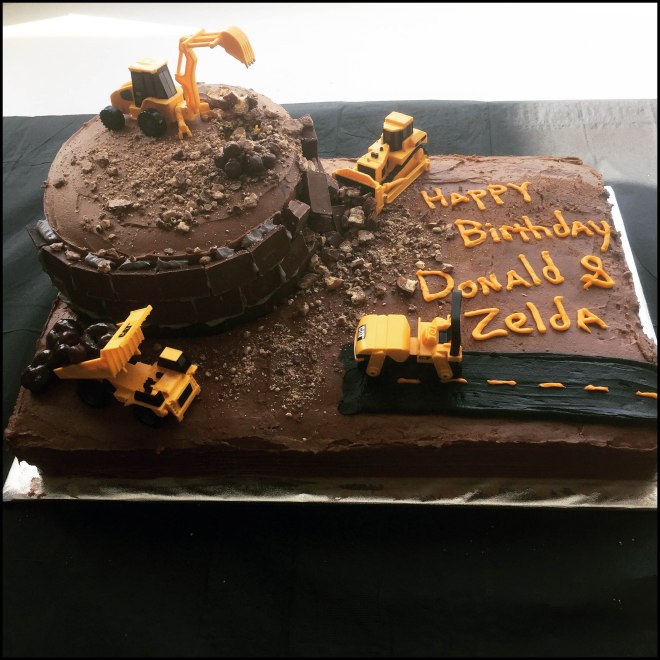 More on that – and the surprise inside – later this week!

It was a great birthday party. Having to scale back our plans a bit turned out to be not so bad, as it made the whole thing a little easier to handle. I was just grateful that both the kids had finally recovered from the stomach flu that had hit us all earlier in the week! Our guests, both adult and children, seemed to have a good time, and our own children, while bewildered, certainly enjoyed being the center of attention! And, fortunately, managed to bounce back the next day and get back onto their nap schedule!